I know my usual posts are quick and easy, but I’d like to take this opportunity and post the long but important story of Milo’s journey  with heartworm.

We adopted Milo from a shelter that rescued dogs from other shelters (often kill shelters). We fell in love with his tiny face when we first spotted him on Petfinder.com. Needless to say, as soon as we got the chance to hold him in our arms, it was love at first sight. We took him home the same day.

We didn’t know much about Milo. His given name was Barnum (he was rescued along with a sibling, Bailey) and he came from North Carolina. He was neutered, and even has a small green tattoo to prove this (in case you see ghost testicles). He had been suffering from tapeworms when we first got him, but a quick visit to our local vet cleared it up and he was as good as new. We kept up his shots and when Faithful Friends Animal Hospital opened up within walking distance of our house, we decided to take him there for his annual check-up. 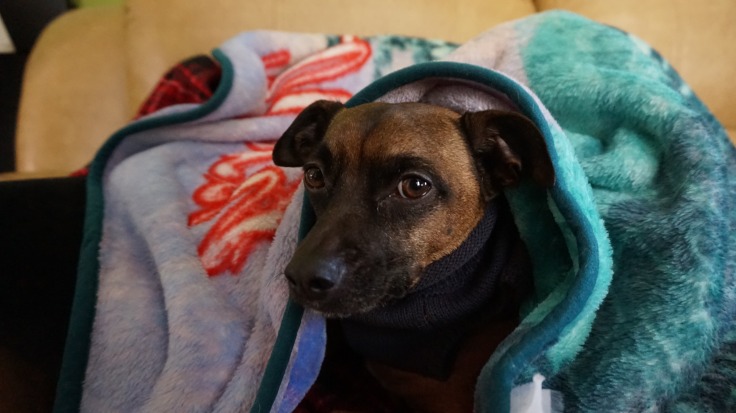 After a routine examination, the vet suggested a blood test (he had previously been bitten by a tick). The blood test raised the suspicion that he may be infected with heartworm and a subsequent urine test confirmed it. We were shocked. Heartworm is prominent in the South. It’s very seldom found in dogs that reside in the North, and when we told our vet that Milo came from North Carolina, combined with the fact that the tests showed adult and not young worms, she came to the conclusion that Milo most likely had already been infected when we adopted him two years prior. She immediately ordered a chest x-ray to determine the stage of the infection and whether there was any significant damage to his heart and lungs. By this time, he was sick of the poking and prodding. He had to be muzzled when he snapped at the x-ray technician.

Heartworm is transmitted through infected mosquito bites. The mosquito carries the microscopic worm larva, called microfilaria, from one host to another. The larva grow into adult size worms and take up space in the dog’s heart and lungs. Depending on the stage of the infection, symptoms differ. Some dogs, like Milo, could be virtually asymptomatic with the exception of an occasional cough that could be attributed to a number of other factors. The later stages of the infection exhibit more serious symptoms like lethargy, loss of appetite, weight loss, and a swollen abdomen. If left untreated, the infected dog will die. It take a toll on the dog’s internal system and even ages them faster. Because of the damage is causes to internal organs, they will die 5-7 years before they should. They could be running around one day and simply have a heart attack.

Heartworm is also 100% preventable. By taking a monthly heartworm medicine, if an infected mosquito bites a dog, the medicine kills the microfilaria, and they never have a chance to develop into full grown worms.

In October 2015, we discovered that Milo is heartworm positive.

We talked to our vet and came up with the best solution to produce the greatest results. A monthly preventative regiment was started right away: this would kill any and future worm larva. The bigger issue was the adult worms that were growing in his heart. For that, a treatment course using a drug called Immiticide was needed. It is a series of three lumbar (back) shots administered within a month. The side effects weren’t dangerous, but they were unnerving.

Immediately after every shot, Milo was shaking, panting, lethargic, and lost his appetite. Each course had a great impact on him. After the first shot, the side effects lasted less than 24 hours. The second and third shots are given within 24 hours of each other, and the symptoms lasted 3 days.

Milo was unrecognizable. He lay on the couch, refused to move or do anything. He was sleeping most of the time. Sometimes, I would take him off the couch to get him to stand up on his own, but he would stubbornly lower himself to the floor. His last shot was administered on December 22, 2015. I came home from work on December 23 to find that he’d had an accident in the house, something he had never done before, not even when we first got him. I was heart-broken. He seemed to be getting worse. I called the local emergency vet clinic, and they recommended I monitor him for the next few hours and see if I notice any worsening symptoms. The accident was a normal, though not common, symptom of the treatment.

Christmas day came. Milo would have been dressed as Santa Claus and follow us around the house hoping to get the toys we’d wrapped for him. But he couldn’t be with us.

One very important part of the heartworm treatment is the quiet period. As the medicine is taking effect, the worms start to die. If a piece of the worm breaks off, it may float through the blood stream eventually getting lodged and the dog could die from a stroke (most common is a pulmonary embolism, a stroke in the lungs). Because of this, we had to keep him confined to only one room in the house. Walks were limited to only doing his business and going back. He was carried up the stairs leading to our house. All the windows and doors were closed to prevent any outside sounds from upsetting him and causing him to bark. No guests were allowed in the house and he wasn’t allowed to go over either.

We’d spent almost all of Christmas day out and in the evening went back home. Milo lay still on the floor in the middle of all the presents, a sad and despondent look on his face. Suddenly, in the middle of our conversations, he got up, walked up to me, and started humping my leg. He was back! For the first time in 3 days, he was his old self again! He went to the pantry where his snacks were kept and started begging (to which we happily obliged) and then jumped on the couch to nuzzle up to us.

I wish I could say it was smooth sailing from there, but it wasn’t. We had to visit the vet two more times after his third treatment. He unexpectedly had a seizure. This cannot conclusively be attributed to the heartworm or the treatment. After liver enzyme tests, it was determined that he most likely ate something he shouldn’t have and that’s what caused the seizure.

He also developed lumps at the site of the injection. They changed shape almost daily. Again, this wasn’t common but was one of the expected side effects of the treatment. After trying to treat them with Benadryl and a cold compress, they never completely went away until weeks later.

Finally, four months after the initial treatment, we went back to the vet and administered a follow-up blood test to determine if the treatment worked. And it did!

This experience was truly eye-opening. I thought we had a happy and healthy dog. I thought we took care of him the way we should have. I was wrong. It was happenstance that from our conversation, Dr. Jill Caruso from Faithful Friends Animal Hospital decided to run a heartworm test. It was fate that of all the vets in Brooklyn, Dr. Jill has the most experience with treating dogs with heartworm.

The heartworm test is $55. A 6 month supply of heartworm preventative is $38. It’s not enough to just love your dog, it is your responsibility to keep them as healthy as possible. At the very least, I hope our story will encourage you to get your dog tested and ensure you’re getting them the right treatment, whether it’s preventative or otherwise.

And if you’re in Brooklyn, go see Dr. Jill. Tell her Milo sent you!